The Cumulative Impact of wind turbines on Aviation usually starts with accepting the impact of a single turbine, as in the example above, and ends with tens or hundreds of turbines in the vicinity of a radar or other aviation facilities.

‘Pilots warn of a disaster as wind farms flourish

LIGHT aircraft pilots have warned it is “just a matter of time” before wind farms cause a “disastrous” accident in Scotland. 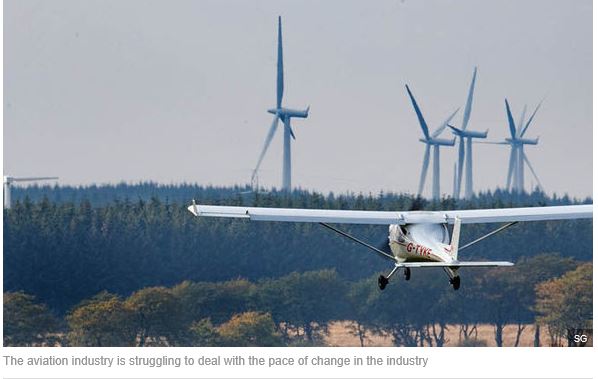 ‘Small planes along with helicopters, gliders, microlights and other hobbyists make up the biggest user group of the UK airspace in terms of low level flying and contribute some £3billion to the economy supporting close to 40,000 jobs. Member organisations admit the fast-growing renewables sector has created some “fairly significant” issues which they have fought hard to resolve. Their main concerns relate to downwind turbulence from the turbine blades plus problems with visibility especially in poor conditions. The fast pace of development mean maps and charts are often well behind of the size of existing farms and new developments with anenometer masts springing up to scout potential development sites.

Last month this newspaper revealed RAF pilots had reported a catalogue of near misses with wind farms and are making over 1,000 manual corrections to their charts every month to try and keep up with the changes.

However, general aviation industry is also struggling with the pace of development. Last night the Light Aircraft Association (LAA) warned there was potential for a mid-air disaster.

LAA inspector Neil Geddes, of Bridge of Weir, Renfrewshire, said “Certainly there is a risk. “You only really understand how cluttered parts of Scotland are with wind turbines when you are flying a light aircraft – you won’t really get the picture tens of thousands of feet high on board a passenger plane. “They cause downwind turbulence which can be an issue but at least we can spot them and take evasive action. “It is the anenometer masts put up to measure wind speed and such like that are the real problem. They are practically impossible to see because they are so tall and slim. If you don’t know there is one on your flight path – and lets face it, it takes maps a year to catch up and by then there will be more of them – there is little you can do. “In certain weather and light conditions they will be impossible to detect. It’s only a matter of time before we have a disastrous accident in our hands.”

Microlight aircraft instructor Colin MacKinnon, who operates Scotland’s oldest airfield in Strathaven, Lanarkshire, near to Whitelee wind farm which is among the largest in Europe, said new developments had the potential to put people out of business unless they were willing to put up a fight. He added: “For about four years, I spent at least one day a week to respond to wind development planning applications and despite promises of community benefits we never received a penny of any funds, which is a bit frustrating. “If Whitelee decided to expand eastward and was given the planning permission to do so we’d be out of business. “While millions of pounds have been spent to investigate the impact and guarantee the safety of commercial aviation such as relocating radars to avoid problems with readings, very little has been done for the general aviation sector which is us. “One of the issues is turbulence. There is no research done as to how close to a turbine it will be safe to fly. We do not have the resource to fund such studies unlike the wind industry which has millions. “So we err in the side of caution. None of us is brave or stupid enough to be a test pilot to see how close to a turbine you can fly before your plane is ripped to shreds. “I think we are among the most experienced in the world when it comes to flying safely in the vicinity of turbines with Whitelee so near to us.”

Over the past five years there have been around 10,000 applications to construct approximately 24,000 turbines across the UK. With prime locations already in use developers are looking at alternative sites, many of which are closer to population and activity centres. A UK Government report to general aviation from earlier this year admitted some airfields had their operations threatened by wind turbine developments. The LAA also admitted some energy companies were eyeing “inappropriate” spots for their structures. CEO Stephen Slater said: “I would say that more than 90 per cent of the turbines run no aviation issues. “The general aviation sector is the main user of low level air space. It’s not just light aircrafts we are talking about but also helicopters, gliders, microlights, parachuters and so on. “But we do have certain factors that have to be considered. There is the risk of potential collision especially in poor, deteriorating conditions when turbines or masts near an airfield may limit the pilot’s options of approach and we know of the radar issues with turbines interfering with readings. “We are also aware of the concerns over turbulence with anecdotal evidence from pilots.” “But I would say that over the years we have developed a good working relationship with the wind energy industry to mitigate any problems that may occur.”

Meanwhile campaigners opposing wind farms have drawn information from abroad to highlight issues to aviation. Christine Metcalfe, of Loch Avich, Argyll, has requested confirmation under Freedom of Information legislation from Civil Aviation Authority that turbines and turbulence from them do not impact emergency landings at airports such as Prestwick in Ayrshire and Glasgow after receiving evidence from Australia, USA and Europe on safety issues. She raised concerns Whitelee was constructed without appropriate safeguards in place and now wants to know what sort of radar and safety impact studies were carried out prior the vast development went up. Ms Metcalfe also wants to know why there has been no studies into the effect turbulence from wind farms has on planes when the organisation itself said in 2012 there was an “urgent need” for an assessment. CAA has issued guidance to aerodrome operators saying a “large number of turbines in an area” will have a cumulative effect that is “of far more significant concerns” but it is yet to respond to the FoI request in more detail. The anti-wind farm campaigner said: “I have learned that during the early 90s the management of the CAA were very supportive of the campaign involving resistance wind turbines as they had real and valid concerns even then. It is a great pity that times appear to have changed somewhat – almost certainly due to governmental pressures. “Without the overall checks and balances in place for this technology, if such pressures were applied they are being proven to be misguided at best and at worst contributing to dangerous decisions being made.”

The renewables sector does recommend that aviation stakeholders are always consulted early in the wind farm planning application process and collaborates with aviation authorities and government to find solutions to radar interference or flight obstruction caused by wind energy developments. They also organise regular workshops and surgeries to bring both sides together to work on any issues that arise.’

Letters were written to the Scottish Government on 2nd June 2015 under Freedom of Information rules and the CAA (Civil Aviation Authority)on the 8th  June, requesting answers to the following questions involving radar technology and wind turbines:

These replies were received:

This was followed with a Very Important  Response to CAA. on 21st August 2015.

A further request with specific questions was sent to the CAA on 1st October 2015.

Re. Freedom of Information Act request F0002371..  Neither have yet received replies.

I have received a reply from the Health & Safety Executive directing me to the M.O.D. for a reply to the questions below as they deny having responsibility for such matters.   I am hoping that the M.O.D will not claim that industrial wind turbines are not a risk at ‘kill assessment’ because they can be spotted by aircraft – as this really begs the question. Clearly being ‘spotted’ depends on a number of factors – not least bad weather/foggy conditions.