As more and more wind energy is added to the national grid will it help to keep the lights on?

If only politicians would allow engineers to be responsible for our energy policy:

IESIS promotes the principle that, before proceeding with any policy for the electricity system, comprehensive independent assessments should be carried out. This would significantly reduce the risk of unsatisfactory outcomes:

This presentation explains the serious difficulties involved in introducing wind generation to the system. For more information about the IESIS stance on how policy for the electricity system should be formulated see: www.iesisenergy.org

Rethinking the Irish and EU Energy Policy By Pat Swords – Fellow of the Institution of Chemical Engineers and Chartered Environmentalist:

There are real parallels between the Irish and the Scottish wind policies: 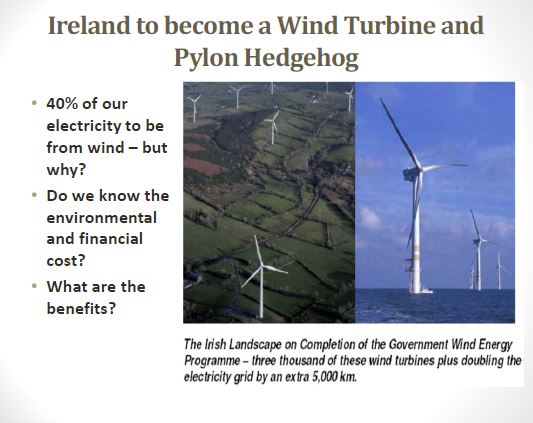 Following this article in the Telegraph Richard North, Pat Swords and Dr. Luxford comment as follows:

He has a point re simple maths, but the issue is that things are tight, many of the plants are old (hence why they are already breaking down), grid stability is strongly related to the ability to feed in locally and stabilise where it is needed – transferring long distances doesn’t work. We have already had some grid failures in Scotland for these reasons.  As noted by Dr. Luxford, if a really cold spell comes for a long time, there is a strong possibility that the system is simply not robust enough to keep functioning. This spell happened back in late 2010 and there are good reasons why the same could happen again, we are after all heading back into a colder cycle. At the end of the day it is in the ‘lap of the Gods’, but the system is nowhere near as robust as it should be and simple maths, such those from Richard North, is disguising the ‘devil in the detail’ and can be seen as an accountant’s answer, which is failing to understand what the numbers actually mean.
——————————————————————————————————————————–

I think that as hard as they try to prevent blackouts, at whatever cost, given a cold dark and windless period in winter, perhaps combined with an unexpected shutdown of a major power station, the grid could well be overwhelmed and come crashing down.