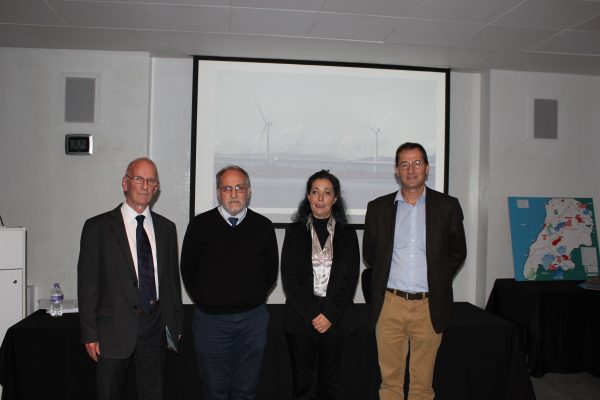 These combined responses cited reports and studies, including an extract in the letter from (ECCD) taken from the Institute of Acoustics (IoA) Bulletin 2009, co authored by named acousticians’.

Affected residents have been passed from pillar to post and back again: taking the advice offered by NHS S A & A to consult  their GP’s, and on doing so state that their GP’s response is that they have little or no guidance or medical references to diagnose “wind turbine syndrome” .

In addition NHS A & A refer to North Ayrshire Council’s (NAC) Environmental Health assessments, which they conclude that in the case of the SSE’s Hunterston turbines, these are operating within noise limits set by planning conditions and that SSE have conducted low frequency monitoring which meets current guidance.

Both Dr Yelland and Professor Alves Pereira’s evidence demonstrated that current low frequency & infrasound  monitoring is not fit for purpose, as the equipment deployed is not designed to record within the specific lower frequency ranges required to find evidence of infrasound impacts.

“I would again request that in future, issues relating to your health be directed towards your GP/NHS rather than Environmental Health.

Environmental Health will only investigate complaints of excessive noise amounting to a statutory nuisance”.

The  presentations by Dr. John Yelland, visiting experienced French Acoustician Patrick Dugast  and Professor Mariana Alves Pereira, provided convincing evidence that there is a significant failure to provide adequate protection to an increasing number of affected people, which includes children and in some cases various species of animals.

Professor Alves Pereria gave a detailed presentation of her research since the 1980’s, that harmful infrasound emissions are not only propagated by wind turbines but other industrial sources & processes i.e., coal mining and grain dryers etc.,.

This evidence is contrary to the sources of information and guidance relied upon by all of the official bodies listed in Melvin Grosvenor’s presentation, who are tasked to provide adequate protection from harm to residents living in the proximity of wind turbines, be it single turbines or large scale wind farms.

Dr Yelland also highlighted the significant concern expressed by INWG and others,  that affected residents are complaining merely because they are simply annoyed by the sight of wind turbines which can be attributed to a nebulous “nocebo effect” or other “non acoustic factors”.

During the Q & A session several members of the audience relayed their experiences, including those who have already had to abandon their homes.

It was reported that only when the turbines are switched off or sufferers are away from their local area of impact, is there any respite from the serious health impacts they are suffering.

However on their return, affected residents are reporting when subjected to further exposure, their suffering increases in intensity and takes longer to ameliorate. There are cases where prolonged and continuous  exposure causes victims to regularly flee from their homes.

Professor  Alves Pereira also presented evidence that this prolonged exposure is linked to incremental harm evidenced by a wider range of symptoms, these have been reported to include, loss of balance, nausea, loss of coordination, a pressure in the ear, thumping in the head or chest, urinary and bowel incontinence, epistaxis (high volume nosebleeds), severe coughs and  increase in chest complaints.

Melvin Grosvenor stated that this serious issue, “cannot be swept under the carpet and there is an urgent need for truly Independent, transparent  and credible research which gains the confidence of existing victims”.

“Victims need to be listened to and believed. Public Health needs to recognise Wind Turbine Syndrome, Vibro Accoutic Disease and all the associated symptoms so that GPs and consultants can provide the right treatment and not waste time and money searching for ‘causes’ that do not exist”.

“New Guidance is long overdue on the safe separation distance from wind turbines to any home. No one should be used as collateral damage”.

It is also clear that the extremely constrained and time-limited research exercise in the case of residents at Hunterston, conducted by NHS A & A, predominantly searching for increase in cases of dizziness and nausea (along with the stated position of Health Protection Scotland) was significantly undermined by the compelling evidence presented at the Seminar.

Professor Mariana Alves-Pereira Ph.D. stated, “It is encouraging to see that Infrasound and Low Frequency Noise is getting wider recognition as an agent of disease”.

Further information on speakers and INWG

Background and reason for the Seminar (Press Release 7.9.17)

A Seminar on Wind Turbine Noise

“Bigger is Better & Scotland’s stepping stone to the future”

According to the wind energy industry[1] “Bigger is Better”, because bigger turbines will generate more electricity and compensate financially for the recent reduction in government subsidies.

There are around 3000 wind turbines across Scotland. Inadequate government control of the distances between turbines and homes has already allowed developers to unintentionally degrade the health of many victims, and even drive families out of their homes. There is also clear scientific evidence that even bigger turbines will increase their existing sound power emissions, along with the accompanying infrasound and potential adverse health impacts on those affected.  By way of example, the two very large ‘test’ turbines erected by Scottish and Southern Electricity at Hunterston in North Ayrshire have grossly affected the health of people living on the Isle of Cumbrae and in Fairlie, up to 3 km from the turbines. 17 people including 2 children, all complain of similar symptoms. Their GPs can do nothing to help them as their ‘condition’ is not recognised by public health.

Similar symptoms such as loss of balance, nausea, loss of coordination, a pressure in the ear, thumping in the head or chest, urinary and bowel incontinence, epistaxis (high volume nosebleeds) are already being reported from people living in close proximity to turbines and windfarms in other areas of Scotland, UK and elsewhere in the world. Common to all “sufferers” is that the symptoms recede when they move away from the turbines. It is believed that these symptoms are caused by the infrasound emission, which is very low frequency sound.

So, the real problem with wind turbine noise is not audible noise; it is the infrasound emission, and as yet there are neither standards nor planning guidance to deal with it.

This is already a public health catastrophe, which cannot be merely attributed to victims “disliking turbines” or any other pseudo-psychological reasons, or “non-acoustic factors”, as often proposed by the wind energy industry to explain reported adverse health symptoms.

The speakers at the Glasgow Seminar are Professor Mariana Alves Pereria and Dr John Yelland, both acknowledged experts in this highly specialised field of science, which up to now has been largely ignored, to the cost of an ever-increasing number wind farm noise victims.

The Seminar will be of interest to: Anyone Living Close to Turbines, Wind Energy Developers, Public Health Protection Officials, Environmental Health Officers, General Practitioners, Councillors and Council Officers, Members of the Scottish and Westminster Parliaments, and indeed anyone seeking to understand the truth about wind turbine noise.

EDF Energy Renewables is proposing to make a new application for its consented Stranoch wind farm site in Dumfries and Galloway between New Luce and Barrhill. The company was awarded planning consent for a 72MW wind farm in 2016 but it is planning on making a new Section 36 application for ‘more efficient’ turbines 175metres (blade to tip) with 3-4MW power output turbines.

0
A Seminar on ‘Wind Turbine Noise’ Letters re: wind turbine noise seminar and Communities should be able to say no to wind farms