I would just say that Tim Harrison and Rachel Connor (the third party objectors to WL3 extension) have now submitted their closing submission to the Public Inquiry and that this has some interesting conclusions regarding alleged failures to comply with existing European and UK environmental law in respect of both the previous Whitelee windfarms and the proposed WL3 Extension. It also looks at the discovery of arsenic in groundwater on a statutory drinking water protected area  and the supposed explanations by SPR for the deterioration in the quality of groundwater at Whitelee during the construction of the original windfarm, which recorded toxic chemicals such as DEHP, more than 400 times the UK and World Health Organisation guideline limit in drinking water.

This ties in with the recent article in the Scotsman (below) and I suggest that everyone should be asking questions about their own water supply and how safe it is to drink:

SCOTTISH Water has come under fire from the official safety watchdog for a deterioration throughout the water supply system.

A report by the water regulator reveals 53 significant, serious and major incidents across Scotland in 2014.

Water quality standards for coliform bacteria, an indicator of contamination, were breached on 40 occasions during that time – more than double the number from 2013 when standards were breached 17 times.

Drinking water quality regulator Sue Petch has launched legal enforcement action because of an unacceptable level of faecal parasites and a number of incidents at one Aberdeenshire water works.

Meanwhile, the E. coli bug, known to cause infections, was found in single samples at Mannofield and Perth.

The regulator said she will be monitoring performance very closely and if necessary will consider the need for regulatory intervention.

Ms Petch continued: “I am disappointed to have to report this position and have requested that Scottish Water examine disinfection processes, in detail, at all of its treatment works.”

Scottish Water said equipment is being upgraded at some sites and that 99.89 per cent of samples taken in 2014 met regulatory standards.

Simon Parsons, the company’s customer planning director, said: “We undertake detailed investigations into all water quality issues to understand the cause, as well as working proactively and taking steps to avoid such issues occurring. We will continue working with the [Regulator] to help us focus on the areas we need to improve on.”

Simon Parson’s responded with his own letter -below- but in my mind if you read the Request for Action  and the final submission we, the public, have a lot to worry about: 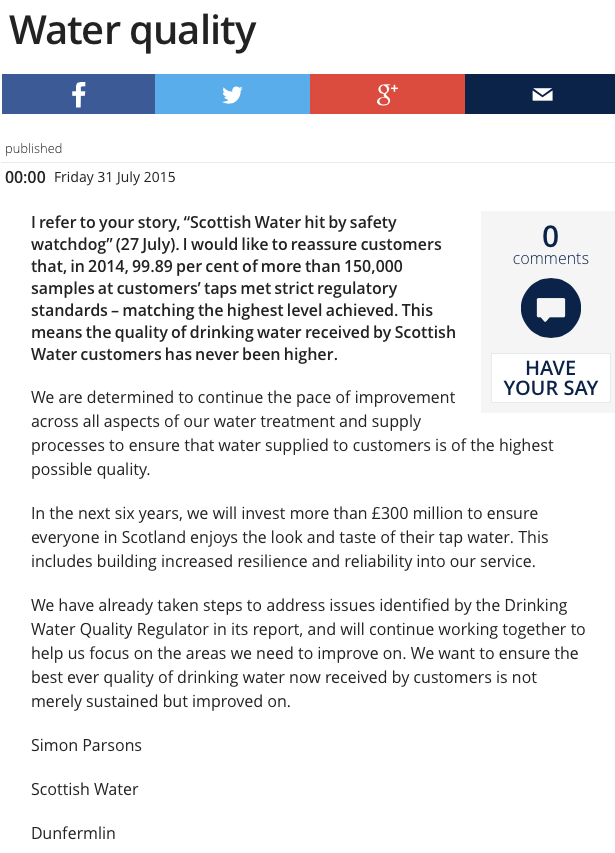