Susan Crosthwaite is calling for an immediate and full independent investigation into the pollution of surface and groundwater of ALL Scottish windfarm developments sited on River Basin Districts.  It has been revealed that the construction of giant wind turbines has led to the industrialisation of water catchment areas damaging water quality and public health. She demands that relevant legislation be adhered to vigorously to ensure complete protection of Scotland’s reservoirs, lochs and private water supplies can be restored.

Commenting from her home in South Ayrshire Susan Crosthwaite said: “Windfarm development in Scotland is clearly breaching The Environmental Liabilities Directive and the Water Frameworks Directive. Developers and government bodies have allowed these developments to proceed in the full knowledge that there are risks to surface and groundwater. Authorities such as SEPA, Scottish Water, Councils and the Scottish Government have failed in their legal duty to protect the water environment. Public authorities should ensure the proper implementation and enforcement of the scheme provided for by this Directive.

People wonder how windfarms can possibly contaminate our water. Firstly, most are constructed on areas of unspoilt moss, heather and deep peat, often with associated forestry. Construction vehicles churn up the ground to make access roads and clear the forests (approximately 3 million trees were cleared at Whitelee). Trees are pulled up, and the churned up peat is washed into the river systems by heavy rain, releasing excessive carbon which the water treatment works are not able to deal with.

“The construction teams then blast quarries and ‘borrow-pits’ to provide rock foundations for access roads and turbine bases – six quarries with 85 articulated dump lorries ferried almost 6 million tons of excavated rock around the Whitelee site for roads and turbine foundations. These excavations allow access to the numerous faults (fractures) and dykes (intrusions) which crisscross Scotland and act as conduits for ground water. Chemical and  diesel spills, therefore, have an immediate channel to the aquifer. 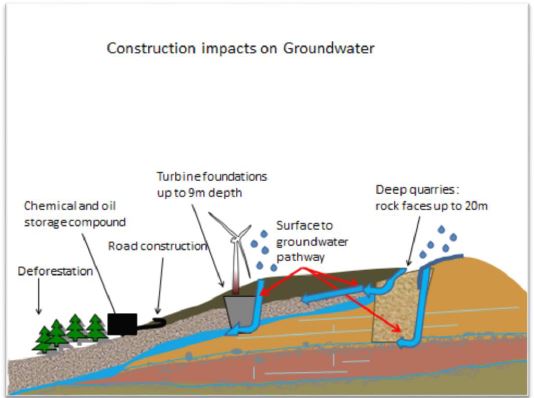 “The evidence of pollution discovered by radiologist Dr. Rachel Connor stems from her own experience of living close to Whitelee, the largest windfarm in Europe, and experiencing first-hand the results of drinking contaminated water. Evidence of pollution was discovered in monitoring reports which  were a requirement for the Whitelee windfarm construction 2006-2009 and were brought before a Public Inquiry re a 3rd extension to Whitelee, where Dr. Connor underwent a 5 hour cross examination. It included a failure to monitor and test for instances of specific contamination related to chemical spill or diffuse contamination from dangerous chemicals- some of which may have come from 160,000 m3 of concrete which were used in turbine foundations and other areas.

“There was also evidence of contamination of private water supplies where springs had failed completely, boreholes had silted up temporarily and water quality was rendered unfit to drink. There is no effective protective mechanism for private water supplies if the local authority responsible for protecting the water supply has no mechanism to insist that a developer find, chart and protect the water source, and is subsequently not responsible for the hydrological environment upon which that water supply depends.

“Windfarm developments have not been monitored or assessed according to the legal requirements which under a European Directive require Member States to ensure the establishment of programmes for the monitoring of water status in order to establish a coherent and comprehensive overview of water status within each river basin district. It is clear that incidents and concerns have been reported by a Planning Monitoring Officer to the regulatory authorities but have not been investigated. Indeed Planning Monitoring Officers are not routinely employed and in any case, information from such officials may be difficult and costly for the public to access. Consequently developments proceed unchallenged.

Windfarm construction has coincided with an increase in raw water colour at Amlaird and other Scottish Water treatment works. Scottish Water test results indicated high levels of colour, iron, manganese, coliforms, E coli and turbidity, but these were not investigated and resolved by the appropriate authority. The disinfection procedures meant that drinking water failed to meet European and UK regulatory standards leading to increased levels of Trihalomethanes – recognised by the WHO as possible human carcinogens. Cranfield University Study

“Now Scottish Water test results from 2005 to 2014 for colour, iron, manganese, coliforms and e coli in Loch Bradan, Afton Reservoir and Penwhapple Reservoir (see chapter 4.5)– also show a deterioration in water quality associated with windfarm construction and pre-construction forestry clearance. This means that many people in East and South Ayrshire are drinking water below the Drinking Water Regulatory Standards. Where water quality has fallen consistently below regulatory standards, statutory authorities have not informed the public of the potential risks to their health despite an EC Directive that insists  ‘Member States shall ensure the necessary protection for the bodies of water identified with the aim of avoiding deterioration in their quality in order to reduce the level of purification treatment required in the production of drinking water’.

“As Whitelee is Scottish Power Renewable’s flagship windfarm, the credibility of all their windfarm developments is based on the belief that their professed mitigation measures are successfully preventing any water pollution. How can the public be confident that this is the case if they do not constantly and consistently monitor all subsequent developments with results made easily available to the public?

“Arecleoch SPR windfarm consists of 60 turbines, operational since Autumn of 2011 This windfarm along with Hadyard Hill, Hadyard Hill Extension, Assel Valley, Millenderdale and Straid windfarms are all sited within the River Stinchar water catchment protected area. Tralorg plus the 5 ‘Straiton’ windfarms including Dersalloch are sited on the Girvan and Doon water protected catchment zones. None of these developments, according to the FOI, have been adequately monitored or assessed. Indeed failure to monitor the impact on surface and ground water before, during and after the construction of the 60 turbines at Arecleoch constitutes a direct breach of the water directives.”

Letters have been sent to the First Ministers,  DECC and DEFRA, various Scottish Government Departments, all 32 Scottish Councils, MSPs and some MPs, MEPs and UNESCO – samples are below:

Letter to DECC        Letter to First Minister      letter to councils

0
Press and Journal 22/6/15 Noise data new weapon in war on windfarms How safe is your drinking water?