RACHEL Connor says samples taken from windfarm on Eaglesham Moor, Renfrewshire, were up to almost 70 per cent of recommended maximum. 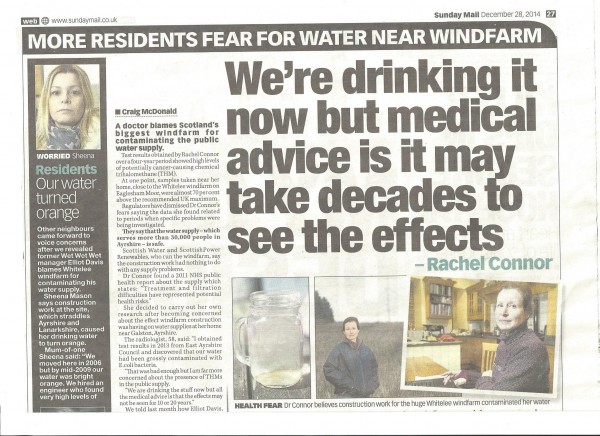 Test results obtained by Rachel Connor over a four-year period showed high levels of potentially cancer-causing chemical trihalomethane (THM). At one point, samples taken near her home, close to the Whitelee windfarm on Eaglesham Moor, were almost 70 per cent above the recommended UK maximum. Regulators have dismissed Dr Connor’s fears saying the data she found related to periods when specific problems were being investigated. They say that the water supply – which serves more than 30,000 people in Ayrshire – is safe.

Scottish Water and ScottishPower Renewables, who run the windfarm, say the construction work had nothing to do with any supply problems. Dr Connor found a 2011 NHS public health report about the supply which states: “Treatment and filtration difficulties have represented potential health risks.” She decided to carry out her own research after becoming concerned about the effect windfarm construction was having on water supplies at her home near Galston, Ayrshire.

The radiologist, 58, said: “I obtained test results in 2013 from East Ayrshire Council and discovered that our water had been grossly contaminated with E.coli bacteria. “That was bad enough but I am far more concerned about the presence of THMs in the public supply. “We are drinking the stuff now but all the medical advice is that the effects may not be seen for 10 or 20 years.” We told last month how Elliot Davis, former manager of Wet Wet Wet, claims the Whitelee windfarm is contaminating the private water supply to his home. THMs are formed when chlorine, used to treat water to make it drinkable, reacts with organic material in the water.

Sample of water shows sediment Dr Connor said: “Whitelee windfarm extension led to the excavation of over 800,000 cubic metres of peat. Disturbed peat puts more carbon into water. “Scottish Water’s own figures show that THM exceeded the regulatory level between 2010 and 2013 by an average of 28 per cent and a maximum of 68 per cent. But the chlorine and organic matter in the water continues to react over time, so the further away you are from the water source, the worse it could be.”

Research has linked THMs to various cancers as well as stillbirth and miscarriages. Last week, MSP Graeme Pearson met Scottish Water’s director of strategic customer service planning, Professor Simon Parsons, to discuss Dr Connor’s findings. He said: “Dr Connor has identified that higher levels of cancer experienced in Scotland currently aren’t particularly well explained. “She is not saying THMs are to blame but she has raised a question mark, saying it would be worth investigating.” Scottish Water said: “The water in local reservoirs has high levels of naturally-occurring organic content. This is not unusual and has been observed in many similar areas across the UK. “There is no evidence to suggest Whitelee windfarm has affected the public water supply. “Although the figures show the level of THMs were in excess of the standards on occasions, the required data reported between 2010-13 was 82.6micrograms per litre, below the standard of 100.”

ScottishPower Renewables said: “We do not believe that our activities associated with Whitelee windfarm have affected any water supplies. “No public body has ever come to us with concerns and nothing that we have seen in any test results leads us to believe that Whitelee windfarm construction work has had a negative impact on water supplies.” Other neighbours came forward to voice concerns after we revealed former Wet Wet Wet manager Elliot Davis blames Whitelee windfarm for contaminating his water supply. Sheena Mason says construction work at the site, which straddles Ayrshire and Lanarkshire, caused her drinking water to turn orange. Mum-of-one Sheena said: “We moved here in 2006 but by mid-2009 our water was bright orange. We hired an engineer who found very high levels of iron. We’ve had to fit various filters. “The engineer suggested building work could disturb the water table. We read of Elliot’s experience elsewhere on the edge of the moor and we’d like some answers.” The windfarm began generating in 2008 and work on a 75-turbine extension began three years ago. ScottishPower Renewables, who operate the Whitelee site, last night insisted the windfarm has had “no negative impact” on water supplies.’

More on complaints of water contamination due to windfarms

Can the word of Scottish Power Renewables be trusted? 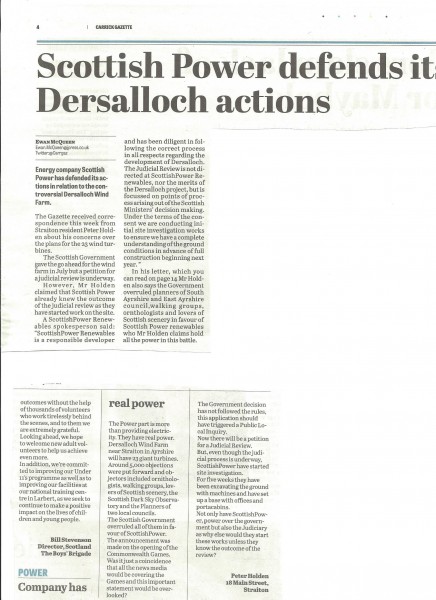