Over the years and increasingly, we’ve had grid engineers and ex grid engineers warning in the strongest terms that the grid and the systems connected with the grid were not going to be fit for purpose, and the more renewables, wind in particular, which were added would mean a grid catastrophe would be likely.

Not the catastrophe it could have resulted in, on 9 August ’19 but more by luck than judgement. The blackout still meant that a million people in England and Wales lost power, there was chaos on the railways and at the worst possible time; in the evening rush hour. On the roads, too, with traffic light failures – as someone tweeted ‘It’s like Grand Theft Auto out here’. Water pumping stations were disconnected too. An airport and hospitals. Chaos all round.

We’ve posted about this many times. Two generators failed in a lightning strike – the RWE Little Barford and the Ørsted Hornsea 1 offshore wind farm and there was much batting to and fro as to which failed first.

There was an interim Ofgem report and here it is -9-august-2019-final-report, released today.

On Page 7 there is this quite amazing statement:

‘Given the changes which are required in the energy system to achieve Net Zero we believe that the core roles of the system operators are worthy of review. Hence, we have committed in our forward work plan to a strategic system operation review from January 2020. The concerns raised by our investigation into the events of 9 August 2019 and associated lessons learned will inform that work. We will also work closely with BEIS ahead of its position paper on system governance in 2020’

We’re reminded that the former Government had the benefit of a thorough review from Professor Dieter Helm which included, inter alia, warnings about the grid and systems, and how to overcome potential catastrophes – the government chose to ignore the report.

Dieter Helm wrote on the subject following the blackout – second link – in which he said:

‘The two years of inaction have had a price. It is to allow the electricity systems to come closer and closer to the edge of the capacity and flexibility margins, and to have much more cost than they need to. This is a price that customers are paying as the legacy costs pile up on their bills. It is now aggravated by the lack of security and resilience in the system that the power cut revealed.’

That relates to that review which BEIS has had on its agenda for so long it’s probably forgotten about it.

Back to the Ofgem report (first link).

Key players in this Green (Tragi) Comedy of Errors:

The investigation focused on whether any of them met their obligations – and the answer is no.

What has come out of it is that Hornsea 1 did fail before Little Barford, although by a short head.

The report, which is detailed and should be read because what it contains is mind-boggling, highlights the utter shambles of the whole system of generation, the free-for-all which has been allowed to build, and the fact that nobody has grasped this green nettle until now.

There was, and is, miscommunication and no communication; generators were, and are, allowed to do their own thing, provide their own statements on worthiness with no checks in place – and that includes Hornsea 1 – individual generators look as if they have internal protection systems in place which are known only to themselves.

How can the Grid run like this? It can’t, and Ofgem has produced a very detailed and, in its anodyne way, scathing report. They would have done better to be upfront, though, and called it ‘Shambles in Green’.

RWE and Hornsea 1 have agreed to voluntarily each pay £4.5 million for their part in it.

We will keep an eye on whether Dieter Helm responds to this.

The Role of Distributed Generation in the UK Blackout of 9 August 2019
JANUARY 5, 2020 By Paul Homewood

John Constable has taken a closer look at the final reports into last summer’s blackouts.
Hidden away is the critical role played by embedded generation, typically wind and solar farms.

John’s post is pretty technical, but the take home message is that the loss of this embedded generation was much greater than originally thought, and probably played the major role in the blackouts. As the share of such unreliable renewable generation rises, so the instability of the grid will increase.

And more concerned letters about the cost to consumers and our environment:

“SIR – On Christmas Day, just like last year, as we popped our turkeys into the oven the entire wind industry collapsed and struggled to supply 4 per cent to the National Grid. By teatime, as we rolled up our sleeves to wash up, hoping for lashings of hot water, the output had dropped to a derisory 0.93 per cent. We could have got more wind from a Brussels sprout.

Annual subsidies for wind and solar to British households will soon reach an incredible £12 billion. The wind industry, it seems, is not exactly “cheap cheap” but more “gobble, gobble, gobble”. Will we be refunded the countless billions for poor or non-existent service? Our gullible politicians, who have been so comprehensively stuffed by the wind industry, certainly deserve a roasting. 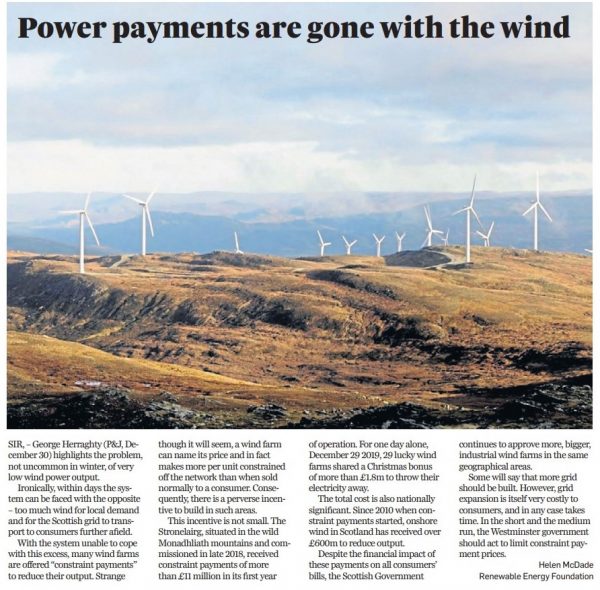 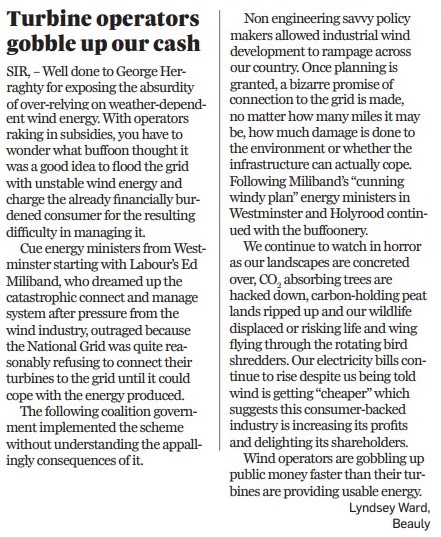 0
Constraint Payments for Wind Turbines: A wind farce which must be brought to an end. Analysis by WEA and REF Arecleoch Extension Private Water Supplies Inquiry