Register and get tickets here 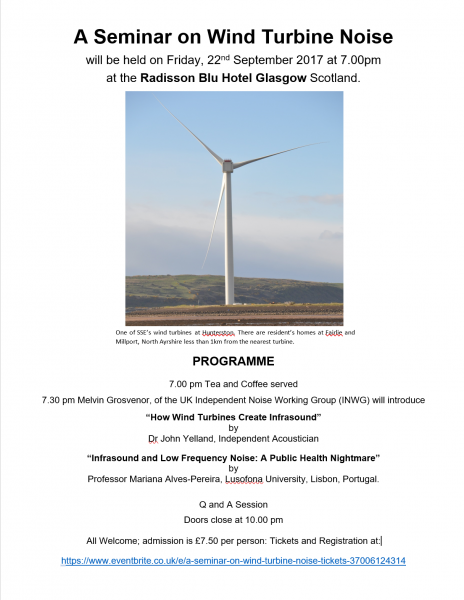 There are around 3000 wind turbines across Scotland, many of them close to individual homes and villages.

Similar symptoms such as loss of balance, nausea, loss of coordination, a pressure in the ear, thumping in the head or chest, epistaxis (high volume nosebleeds) are reported from some people living in close proximity to these turbines (also at many wind farms in the UK and elsewhere). It is believed that these are caused by the infrasound emission, which is very low frequency sound. Turbine infrasound is well below 20Hz and therefore inaudible, but can be perceived through the described symptoms.

Government guidance does not define a fixed limit to turbine noise levels at local homes; instead, in simplified terms, turbine noise at any home must not raise the noise level there by more than 5 dB above the background noise measured there without turbines.

The major problem with wind turbine noise is not audible noise; it is the infrasound emission which often accompanies the audible noise that are now causing serious adverse health effects for an increasing number of local residents near an increasing number of wind farms. As yet there are neither standards nor planning guidance relevant to wind turbine infrasound, or indeed any turbine acoustic emissions below 45 Hz. Neither is there any approved guidance on so-called “excessive amplitude modulation” (EAM), which in reality is audible noise combined with a very high level of infrasound.

Government and councils have chosen not to address the problems of the EAM and infrasound content in wind turbine noise, despite the considerable and widespread documented evidence of the harm it can cause.

It is not acceptable that Government, Council Officers and NHS Scotland echo the wind industry mantra that there is “no proven causal link” between wind turbine infrasound and the adverse health effects reported by increasing numbers of wind farm neighbours; the evidence is overwhelming. Responsible local residents of good character have complained many times of the symptoms they suffer when the turbines operate. Their GPs are unable to find any alternative cause of their suffering. There can be no denial of the temporal and spatial links between turbine operation and patients’ symptoms: when turbine operation ceases the symptoms always subside, and when the residents leave the area (which they often do for respite) the symptoms always subside.

The wind industry claims that residents are somewhat annoyed by audible turbine noise, and because they dislike wind turbines for various other reasons their annoyance is “enhanced” to the point that they suffer the symptoms they report. In the cases presented in this seminar, it is particularly clear that the symptoms are physiological, not psychological.

There is current Government guidance on the use of the precautionary principle in matters of public health. The first page states (with my emphasis):

“The precautionary principle should be invoked when:

there is good reason to believe that harmful effects may occur to human, animal or plant health or to the environment; and the level of scientific uncertainty about the consequences or likelihood of the risk is such that the best available scientific advice cannot assess the risk with sufficient confidence to inform decision-making”

Dr. John Yelland and Professor Mariana Alves explain all this at: A Seminar on ‘Wind Turbine Noise’.

The Seminar will be of interest to developers Public Health Protection Officials, Environmental Health Officers, General Practitioners, Councillors and Council Officers, Members of the Scottish and Westminster Parliaments, and indeed anyone who seeking to understand the truth about wind turbine noise.

0
Summary of the situation on wind turbine noise pollution, children, and the WHO WIND TURBINE NOISE – Seminar review and up date