“What other industry is allowed such a wide berth to profits while completely sacrificing the public good?” 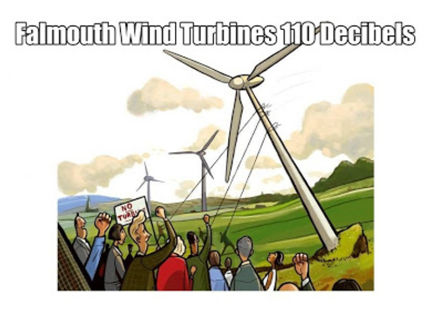 Greetings from the North American Platform Against Wind Power. Millions of people around the world join you today in spirit and voicing their support for your protest, and in solidarity with your objectives. Thank you very much for this opportunity to address you via the organizers, Dave Moriarty, Frank Haggarty, and Marsh Rosenthal, and so many more, although we had wished very much to be with you in person.

We are very aware of the Falmouth history: We have sadly watched it unfold, as it does, regrettably, around the world in various formats, and with regularity, with the same sense of incredulity and dismay…………..

Thank you for inviting us to make a contribution to your wonderful demonstration here today. We are speaking to you from Scotland in the UK and we are united with thousands across the world fighting the same evil. The wind industry.  With over 2,200 anti wind groups we are a powerful voice and governments everywhere need to take notice of us.

Scotland is a country that has been ravaged and abused by its own government and multinational wind developers. A country rich in wildlife and stunning scenery.  Home to the most famous Loch Ness, now threatened by 500 monsters in the hills that surround her.  A country that has dispersed settlements of rural peoples who are routinely ignored and swept aside in the battle against the wind giants and our own government. People who can only survive on the goodwill of tourists who visit our beautiful country to marvel at our landscapes, seascapes and wildlife. There has been systematic destruction by wind turbines and the monstrous pylon lines that sweep through our glens and mountains to take any power far away to the cities. It is a crime against the environment. It is Ecocide.

There is a glimmer of hope that the majority elected UK government will remove all financial support to the onshore wind industry, saying targets have been met with current deployment and the available money has been used up. If this happens the greedy multinationals may well think twice about speculating if the rewards are not so mouth watering as to tempt them.

The Scottish Nationalist government is still fighting against this manifesto pledge by the UK government. They fight against us too and speak only for the wind industry to the detriment of Scotland’s own rural citizens.

Pleas from rural communities have gone unheeded and now we are seeing people increasingly looking at fighting the injustice of wind through the courts. An expensive and challenging process.

There are many people worldwide who are making a difference to this war on wind.  You should be rightly proud of those in your country, like the legendary Dr. Nina Pierpont and other professionals, who have waged an unceasing battle against great odds to alert the public to dangers to health associated with this technology. We are therefore delighted that Dr. Sarah Laurie is speaking to you on this subject. Few have suffered more in the way of libellous onslaughts which, happily, most the perpetrators have now been forced to retract.

The Australian Senate Inquiry last year is probably the first serious attempt seen in any country to get at the truth regarding debilitating health impacts seen.  Those submissions made are worth careful study as the evidence of harm presented from many quarters is potent indeed.

Not only are there direct health impacts like noise, infrasound and shadow flicker we have now been alerted to the frightening potential of water pollution. For those who would like a link to find out about wind turbines and associated water contamination please ask Dave and he will pass it on.

Authorities charged with the safety of drinking water and with wind power developments in their areas should be given a copy of the U.K’s ‘Request for Action’ as lodged by our own Susan Crosthwaite. They should be required to look at the correlation of wind farm developments in the upper reaches of river catchments and increased levels of flooding. They should also be required to plot wind farms in the upper reaches of flood risk areas.

The Scottish Environment Protection Agency is currently reviewing this on behalf of the Scottish Government following pressure from anti wind campaigners.

Water pollution is a very real threat to the health of citizens in the areas affected by wind development and must be taken extremely seriously.

Flooding is another risk as access tracks are hacked into peat land, moors and forestry. We all know water travels down the easiest route and it will follow the man made channels as near disasters in Ocotillo and Derrybrien in Ireland proved.  Peat is a carbon store and acts like a giant sponge to absorb rainwater. Chop into it and carbon gets released and the access tracks can facilitate a raging torrent threatening homes further down the hillsides.

Air safety is another serious issue.

Freedom of Information requests have been lodged in the UK and there is currently on-going dialogue with the Civil Aviation Authority about industrial wind turbines. We are asking questions regarding the negative effects of both radar disturbance and turbulence caused by close proximity to airports. Even if a technology eventually evolves to address radar issues,   it will not solve the problem of emergency landings with industrial turbines in the flight path. The light aviation world has already voiced concerns regarding anemometer masts being difficult to see until it is almost too late. It would seem there are no regulations to plot them on maps. With the tragedy in Dakota when four people perished after striking a turbine in poor visibility it is high time, with the worldwide tsunami of industrial turbine development, aviation safety was a priority.

It is astonishing that the wind industry gets away with doing so little to protect the people and wildlife their developments impact upon and that they are aided and abetted by our own governments.   They should be the protectors of citizens and not the pockets of the already wealthy multinationals and complicit landowners.

There is a woeful lack of public education on the whole wind industry over energy, environmental and financial aspects. It is possible that together with others regions around the world, your area may have many scientists and doctors employed by their (in your case federal) government who provide them with grants. So they can become extremely reluctant to even investigate or study the issue and risk losing their funding. This however results in the loss to citizens of much needed scientific investigation, and a pretence that it’s not happening – i.e. ‘ostrich syndrome.’ Which makes those who do speak out all the more valuable.

To end our contribution to this demonstration we felt it appropriate to use an adaptation of some of Winston Churchill’s famous words, taken from one of Scotland’s popular anti wind facebook pages ‘Wind Energy’s Absurd’ – the acronym will not be lost on campaigners gathered here today.   These powerful words emphasise the passion and determination to protect our homelands from the ravages of wind related industrialisation and its people from the threat of debilitating health impacts affecting them in their own homes.

We will never surrender!’

http://www.windsofjustice.org.uk/2015/10/air-traffic-safety-issues/ -scroll down for references

and: http://www.windsofjustice.org.uk/2016/01/re-decision-v9n-concerning-compliance-by-the-united-kingdom/ which has a whole section on civil aviation.