Planners have finally lost their patience with the operators of the largest windfarm in Angus.

The Courier can reveal a deadline for a detailed update on the submission of a noise monitoring report for the eight-turbine Ark Hill development near Glamis passed in the latest stage of a long-running saga over environmental controls at the Strathmore site.

Angus Council officials told Green Cat Renewables formal enforcement action will be considered if the monitoring report ­ demanded about 10 months ago ­ is not delivered soon. The ultimate sanction could be shutting down the 266ft turbines, which have been operational since 2012.

Residents in the area who say the turbines have ruined their lives accused Green Cat of “giving the council the run around”.

Wester Balblair substation is still not sorted nearly three years on. These developers have to be forced to do anything and they are reluctant because they know that they can’t comply.

This is why it has been a priority for the Foundation to support the work of anyone developing a low cost but accurate acoustic monitor which means that anyone is able to accurately measure the full spectrum so that noise polluters cannot hide or deny what their developments are exposing neighbours to.

The Cotton Farm initiative is a great start and on the right track. 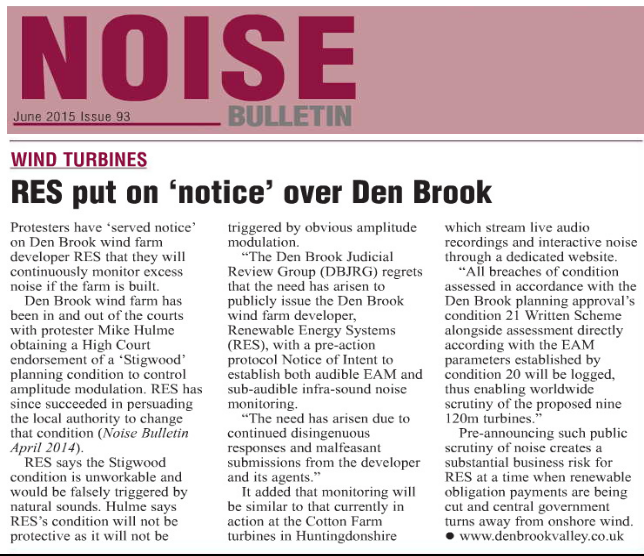 Devices which accurately measure the pressure changes in the infrasound range will be a big advance and that work is getting closer – both for a fixed unit but also for dosimeter which is portable.