Update on Professor Jack Ponton’s article of the 19th August: 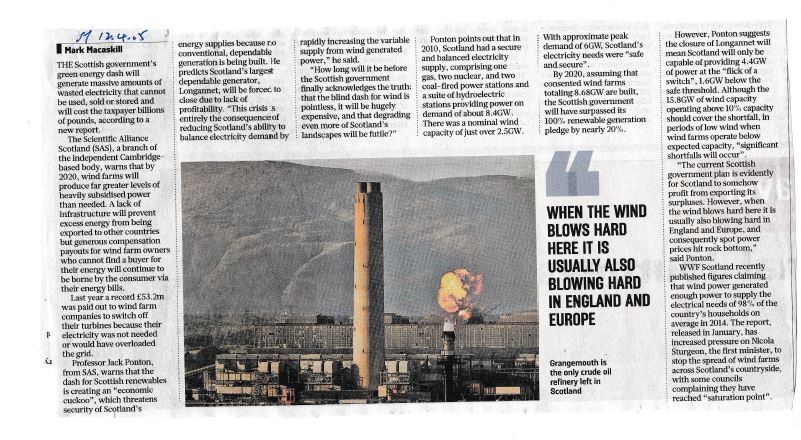 Targets set by the Scottish Government for renewable electricity generation have now virtually been met by schemes that are already operating or have been consented.

UK renewable electricity schemes in operation or consented – including Scotland’s – now account for nearly all of the subsidies available from the Treasury up to 2020.

Energy Minister Fergus Ewing stated recently: ‘The Scottish Government’s target is to generate the equivalent of 100% of Scotland’s gross annual electricity consumption from renewable sources by 2020 as part of a wider, balanced, low carbon energy mix’.

In 2012, Scotland’s gross electricity consumption was about 36.6 TWh. Output from operational and consented capacity (17 and 18 TWh respectively) is already capable of generating about 35 TWh – very close to the target. Schemes still in planning, almost all of which are wind, have the potential to produce an additional 18.1 TWh –   grossly in excess of what is needed. (See notes below and new research by the Borders Network of Conservation Groups (BNCG.) attached).

Scottish renewables targets seemed ambitious at the time they were set, given their low starting point, but growth in renewables across the UK has accelerated rapidly under generous subsidy schemes. Now that the Treasury’s renewables subsidy pot is almost empty, the Scottish Government needs to consider the logic – and potential liability to Scottish citizens – of allowing schemes that are surplus to its 2020 target to come on stream.

If the renewables target is overshot, taxpayers will incur heavy costs in unnecessary subsidies – over and above the hundreds of millions of subsidies for those operational and consented schemes needed to meet the 2020 target. The Renewable Energy Foundation calculates that green power generators in Scotland received more than £600 million in public subsidies last year (with 91.5% being paid for by electricity consumers in the rest of the UK). This sum WILL almost double as schemes that have consent but are awaiting construction come on stream. To put this in context, £1.2 billion was more than 10% of Scotland’s income tax last year (2013).

As the Scottish Government has an annual budget of around £54bn, it is clear that an independent Scotland would face substantial –and completely unnecessary – subsidy payments should it sanction an overshoot in this country’s renewables target.

2 Audit Scotland estimates that a renewable energy capacity (ie the maximum that can be generated under optimum conditions from all renewables schemes) of 14-16 GW is needed to meet the Scottish Government’s 2020 targets. Current data show that 13.5 GW of capacity is already operational, under or awaiting construction, and that another 7.2 GW is in planning. The simple histogram in the attached paper by Jack Ponton, Scottish Renewable Energy Targets and Planning, shows that whatever measure – capacity or output – is used, Scotland risks overshooting its 2020 target.

4  Subsidies -Subsidiesare used to incentivise the deployment of renewable generation technologies. The money is collected directly from consumers’ bills by electricity supply companies, who pay it to the generators of renewable electricity. The Treasury imposes annual caps, through the Levy Control Framework (LCF), on these consumer-funded levies. The purpose of the LCF is that DECC “achieves its fuel poverty, energy and climate change goals in a way that is consistent with economic recovery and minimising the impact on consumer bills[iv].” The LCF ‘requires the Department to develop action plans with HM Treasury to bring spending within caps if forecasts suggest spending will exceed them, with particular urgency if forecasts exceed caps by a specified extent – currently 20 per cent.’ The LCF provides for the expansion of renewables capacity through annual increases in the cap on total spending on subsidies from £3.2 billion in 2013-14 to £7.6 billion in 2020-21. Yet subsidies are already forecast, at £3.5 billion in 2013-14, to exceed the cap, although still to be within the cap plus 20% headroom of £3.8 billion..

5  Subsidies are paid at different rates for electricity according to a number of factors such as the technology and its scale. Offshore wind attracts more than onshore wind, for example (about £105 v £45 per MWh after allowing for the wholesale price of the electricity). So the average subsidy has changed over time, as the technology mix has changed, and has increased as more expensive offshore wind schemes become established. The average cost of subsidising renewable electricity in 2011 was about £45per MWh, when technologies with a low subsidy rate predominated, but has recently risen to £69 per MWh[v] with the expansion of wind and solar power. Even if this rate increases no further by 2020, it would only be sufficient to subsidise the generation of 132 TWh of electricity from renewables, given the LCF limit of £7.6 billion plus 20% headroom. If expensive technologies such as offshore wind and large-scale solar predominate by 2020, and their subsidy rates are maintained, then the renewable electricity generation affordable under the LCF may even be much less that the 110 TWh that would satisfy the UK mix of renewable energy.

6.The Borders Network of Conservation Groups (BNCG) was formally set up in spring 2014 by diverse groups across the Scottish Borders to promote the appreciation and protection of the unique and beautiful landscape and amenity to  the region’s economy, culture, recreation and ecology. The BNCG is a not-for-profit organisation, with no party political alignment, and includes among its membership conservation groups, amenity societies and non-statutory planning consultees. Its current focus is the lawful and rational consideration of wind energy development in the Scottish Borders.

0
50 community councils from across Dumfries and Galloway write to the First Minister demanding a moratorium on any further planning consent to wind farms. Are there Risks to Energy Security in Scotland under present energy policy?